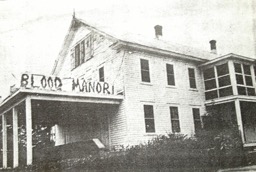 1971 site for the first Blood Manor was the former convent of St. Michael's Church in Ridge, Maryland.

Edwin "itsi" Atkins, in 1971, created a sound and light haunted production which he named Blood Manor. The success continued until 1980 and received worldwide press and praise.

Itsi's research has not produced any evidence that the existence of a professional live action, haunted house was in operation before 1971. He believes Blood Manor is America's First Haunted House. And a major contribution to the success of the haunted house industry.

Legendary Blood Manor comes back from dead in New York

It was called "Blood Manor, and every Halloween season from 1971 through 1980, Southern Marylanders would make the pilgrimage to wherever it was that year and pay to get the daylights scared out of them. As visitors walked through the manor’s darkened halls with a guide, a variety of ghosts, ghouls, goblins, Werewolves, mummies, vampires, monsters and other creatures of the night would jump out from the shadows to greet the guests, cause their heads to beat a little faster, send chills up and dove their spines and make their hair stand on end.

This year Blood Manor returns, not in Southern Maryland, but in New York City, not too far from Broadway. Its Southern Maryland originator, however, is only allowing the use of the name and is not invoked in the production, But he hopes this years venue will spark an interest in a book he is writing about the manor’s history.

Blood Manor was the creation of Edwin Itsi Atkins, a former St. Mary's College student who, in 1971, was working as a substitute music teacher in the St.Mary's County public schools. Now living in New York City; Atkins, 58, talked this week about how Blood Manor became a reality.

“I had been approached about producing a sound and light show at [Edgar Allan] Poe’s grave in Baltimore,” Atkins recalled, “and research on Independence Hall in Philly.” He said neither of those projects ever materialized, but from those experiences the seeds for Blood Manor were planted. For Halloween 1971, Atkins got permission to use the abandoned convent at St. Michaels Catholic Church in Ridge. The three-story 25-room former nuns residence was about to be demolished but was given a short stay of execution to be transformed into the first Blood Manor.